Tiziano Vecelli, known in English as Titian, was one of the most influential artists in the Italian Renaissance, and had a massive impact on the world of Western art. He was an incredibly versatile painter, and produced religious works, portraits, landscapes, and mythological scenes. Titian’s most famous paintings include Venus of Urbino, Bacchus and Ariadne, and the Assumption of the Virgin. 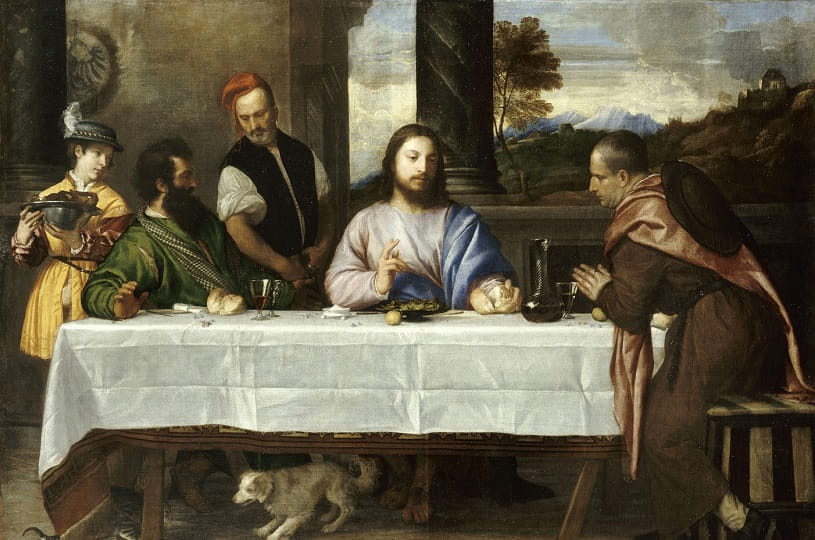 Image via https://upload.wikimedia.org
Titian’s exact date of birth is unknown, but this is quite common during the medieval and early modern periods. Titian himself claimed to have been born in 1474, but this would have made him 102 at the time of this death. While this isn’t impossible, it would have been extremely unlikely in the 14th Century. It’s not believed that Titian was born between 1488 and 1490, which made him around 88 at the time of his death in 1576.

He was born in an area called Pieve di Cadore, in Venice, to a reasonably well-off family. At the age of 12, he was sent to Venice to apprentice with a painter, which was probably organised through his family’s good connections in the area. Titian and his brother apprenticed with several painters from the Bellini family, who were successful in the Venetian art school. During this time, he worked with several painters his own age, mostly on frescoes and some portraits. Contemporaries of the artist already felt his work was at master level, even this early in his life. 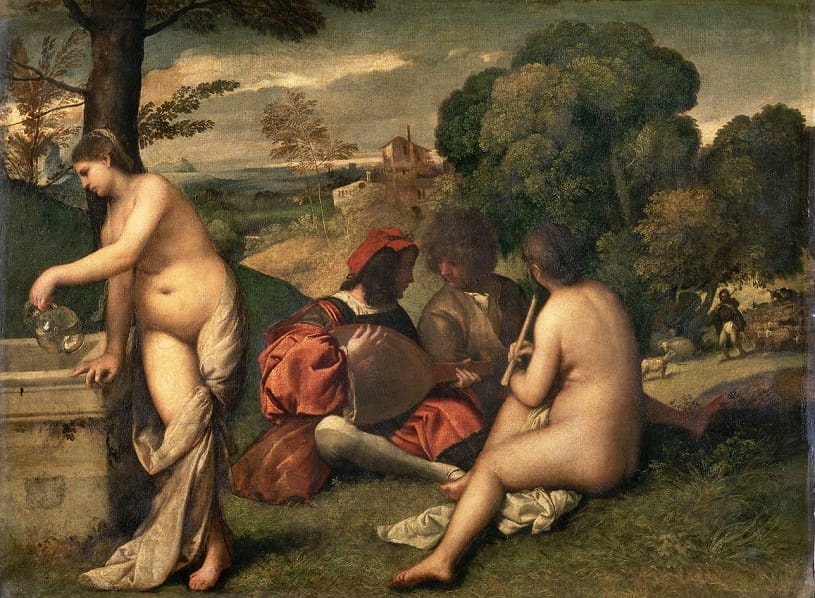 Image via https://wikimedia.org
This was the period of some of Titian’s greatest accomplishments. During the period of 1516-1530, he painted some of his most famous works, and moved away from his original style. Instead, he began to favour larger, and more complex subjects that would stretch his skill. One perfect example of this is the Assumption of the Virgin, which was painted for a basilica in Venice, where it still hangs today. Work of this scale had rarely been completed in Italy before this time, and it caused quite a commotion with the local art community.

During this time, the great painter mastered his study of colour, and painted many bold works that weren’t in keeping with the traditional gloomy style of many Renaissance painters. In 1530 he painted The Death of St. Peter the Martyr, which was something of a controversial work. It combined extreme violence and landscape, and this became the style of his later work. Unfortunately, the painting was destroyed in 1867, and only copies and engravings now exist. 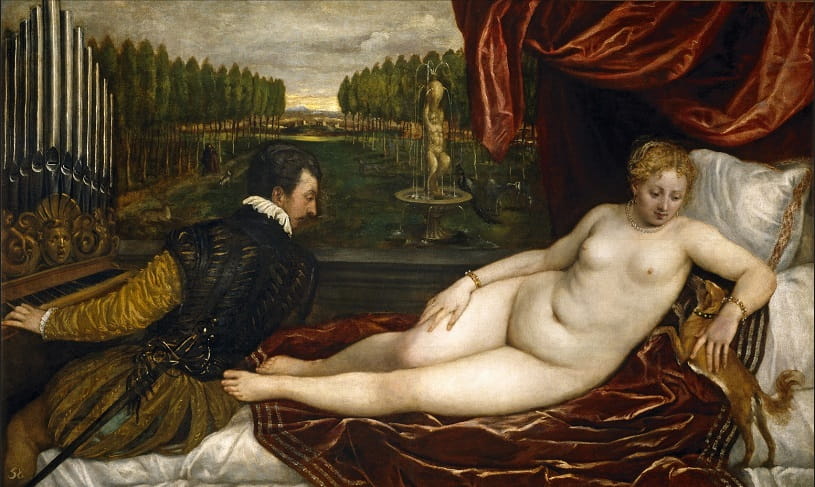 Image via https://wikipedia.org
In 1516, Titian had become a patent of the ducal palace of Venice, but he lost this title in 1538 to his rival Il Pordenone. He lost the title because he neglected his work for the ducal palace, instead focusing on his own interests and subjects. However, when Pordenone died at the end of 1538, Titian was reinstated after his renewed efforts to impress the Doge.

Unfortunately, one of Titian’s works (the Battle of Cadore) was lost in a fire in 1577 that swept through the ducal palace, also destroying work by a great number of other Venetian painters. There now only remains an unfinished version, and a low-quality engraving to remember the piece by. During his period of artistic maturity, Titian painted a great number of portraits, including many famous people such as monks, cardinals, and princes. His success at this period in his life can only be likened to that of other Renaissance painters; Raphael and Michelangelo. 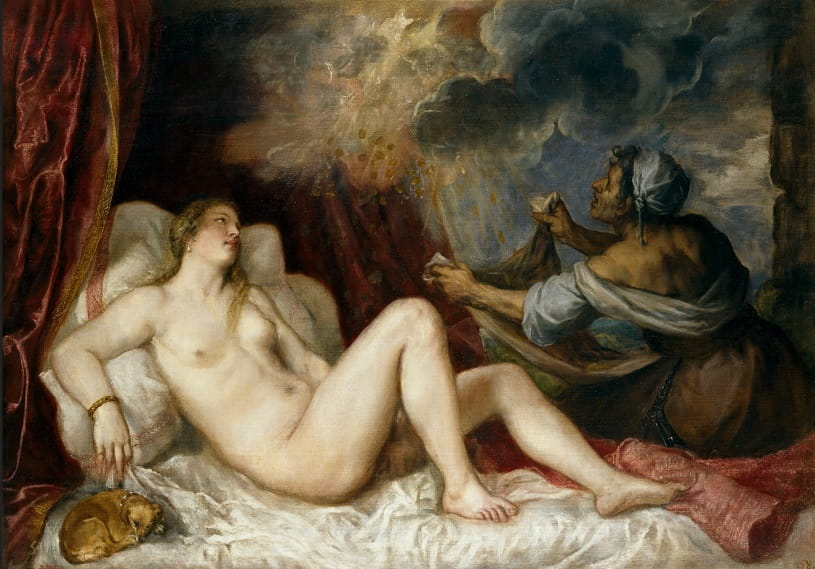 Image via https://upload.wikimedia.org
For the last 26 years of his life, the great master mainly worked for Philip II of Spain, and as a portrait painter. It was during this period that his desire for perfection overwhelmed his artistic output, with some paintings sitting in his studio for up to 10 years. He would constantly bring the paintings out again and adjust colour and expressions to make the pieces more refined.

During his time painting for Philip II, Titian created a series of mythological scenes, mostly inspired by Ovid. The series contained the following paintings:
•   Danaë
•   Venus and Adonis
•   Perseus and Andromeda
•   Diana and Actaeon
•   The Rape of Europa
•   The Death of Actaeon

Titian continued to accept commissions right up until the end of his life. His last ever painting, Pietà, is believed to have been painted for use on his own grave. Titian wanted to be buried in the Basilica di Santa Maria Gloriosa dei Frari, and the painting was considered payment for his space. However, he ended up being buried in Pieve, his place of birth.

Titian died of a fever in 1576, while the plague ran through Venice. His son Orazio, who was also the sole heir to his entire fortune, died of the plague around the same time. 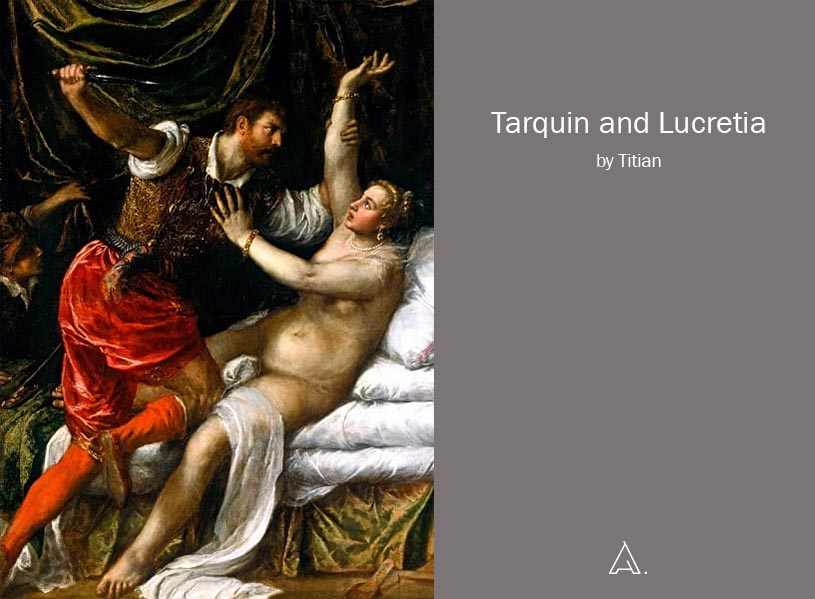 Where did Titian live?

He spent most of his life in Venice, home of the great Renaissance painters, but also travelled to Rome and Augsberg, Germany.

When was Titian born?

The date is contested. Titian claimed it was 1474, but current academic belief is that he was born between 1488 and 1490.

Little is known factually about Titian’s personality, but much can be worked out from his art. For example, many of his paintings depict violence and battle, but his early work makes great use of colour. His female subjects are quite firmly painted for the male gaze, and are mostly unnecessarily nude. It’s also fair to assume that the fame went to his head somewhat.

This list could go on for a very long time, but here are some of Titian’s most famous works of art: 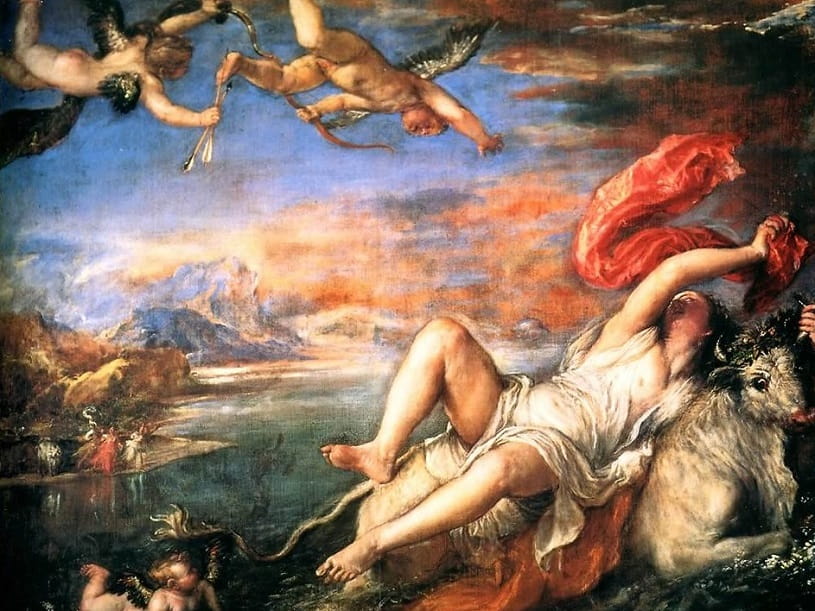 Image via http://www.titian.org
This painting is part of the set commissioned by Philip II and inspired by Ovid’s Metamorphoses. It depicts the God Jupiter, in the form of a bull, stealing Europa and carrying her off to Crete. This is considered one of his most famous paintings, and is essentially proto-Baroque with its vibrant brushstrokes and hazy lines. 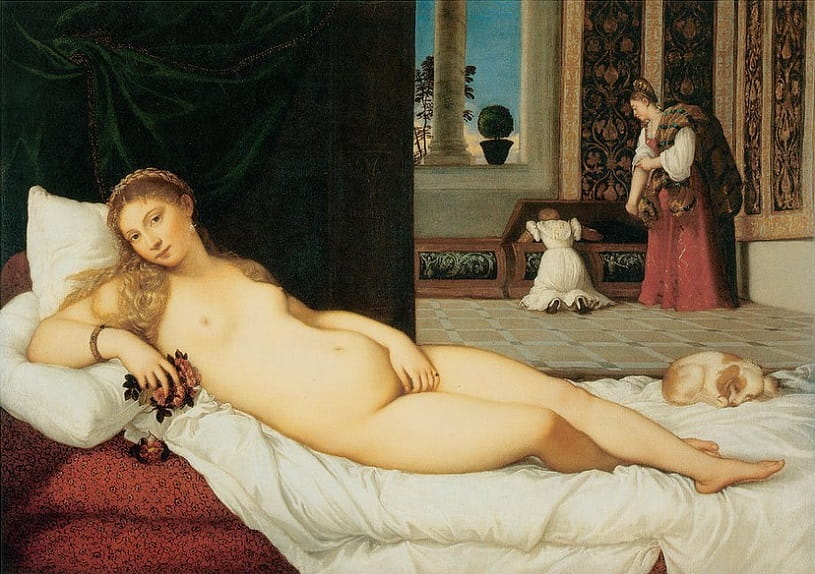 Image via https://pixels.com
This was painted during his high period, and was commissioned by the Duke of Urbino. It depicts the Goddess Venus reclining nude in the very forefront of the painting, lying on a bed in a Renaissance palace. The most striking thing about this painting is the eroticism; Venus stares straight at the viewer, and is both aware and unbothered by her nudity. Considering when this was painted, this was quite a controversial work. 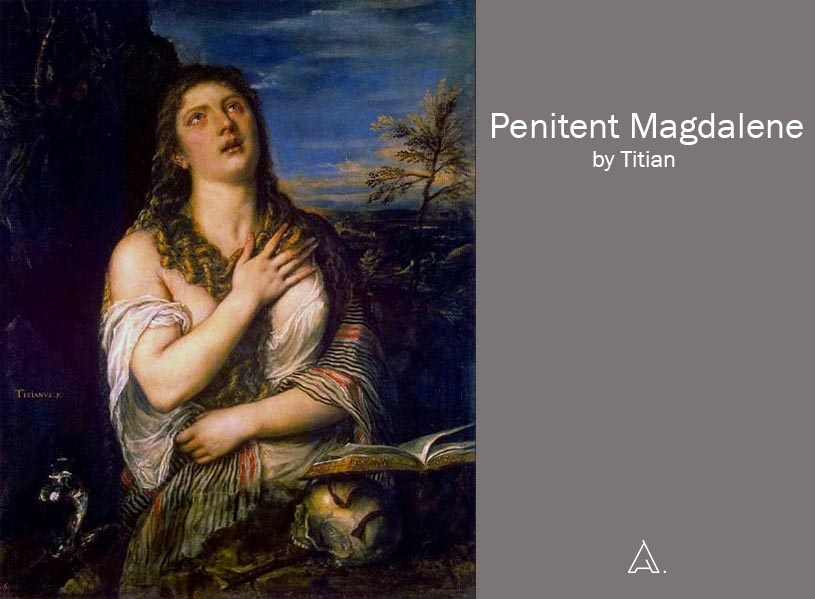 Image via Titian https://wikimedia.org
actually did two paintings of Mary Magdalene, one in 1533 during his period of high work, and another in 1565, during his later years. The first was commissioned by the Duke of Mantua as a devotional painting for the poet Vittoria Colonna. The painting is rather sensuous for a devotional work, as St. Mary has her breasts exposed, and is lit up against a dark background. Mary’s curvier body, blonde hair, and full lips are all in line with Renaissance standards of female beauty. The later version of the painting is the same composition, but Mary is clothed, and Titian added in various artistic symbols, such as an open book and a skull. The colour of the painting is more balanced too, with a brighter sky and more colourful clothing. 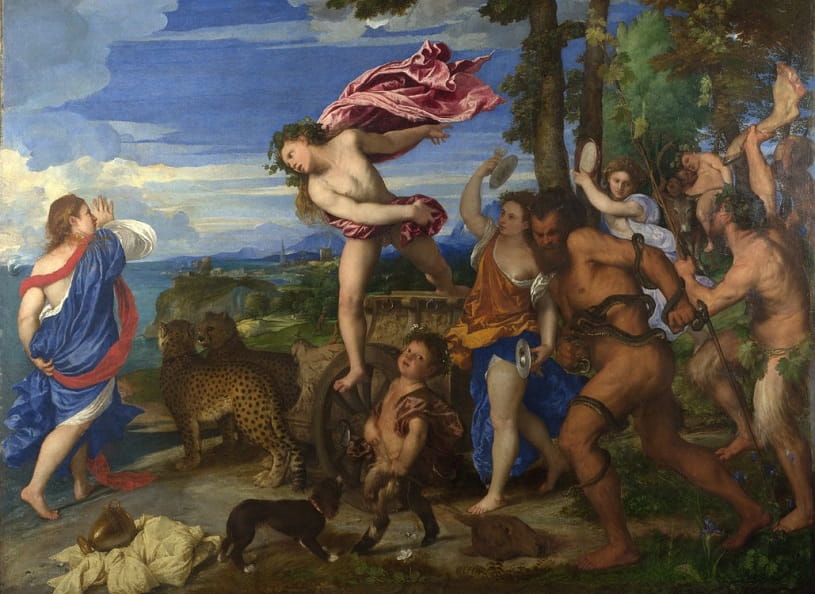 Image via https://wikipedia.org
Titian was commissioned as a chief painter for the Duke of Ferrara, and was asked to create a series of mythological images, of which this is one. It shows Ariadne, who had been abandoned on an island, being discovered by the God Bacchus. The use of colour is particularly striking, and this, along with its composition; make it one of the most famous pieces of Renaissance art. 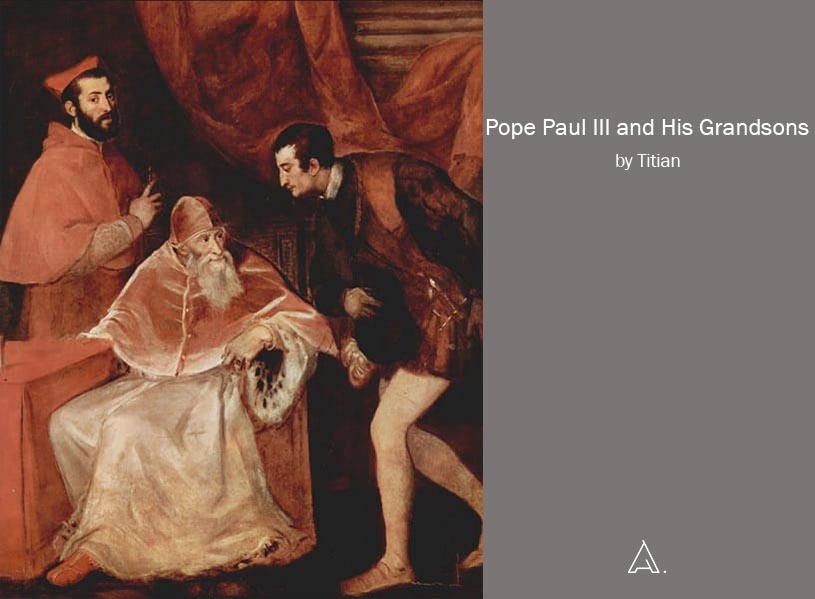 Image via http://www.everypainterpaintshimself.com
Titian was well known for his portrait work, and this piece is a perfect example. Pope Paul III had a difficult relationship with his family, and was not a particularly religious or effective Pope. The reason this painting is so incredible is because Titian manages to capture their relationship in the small gestures and body language of his subjects. This is widely regarded as one of the best portrait works ever.

How did Titian contribute to the Renaissance? 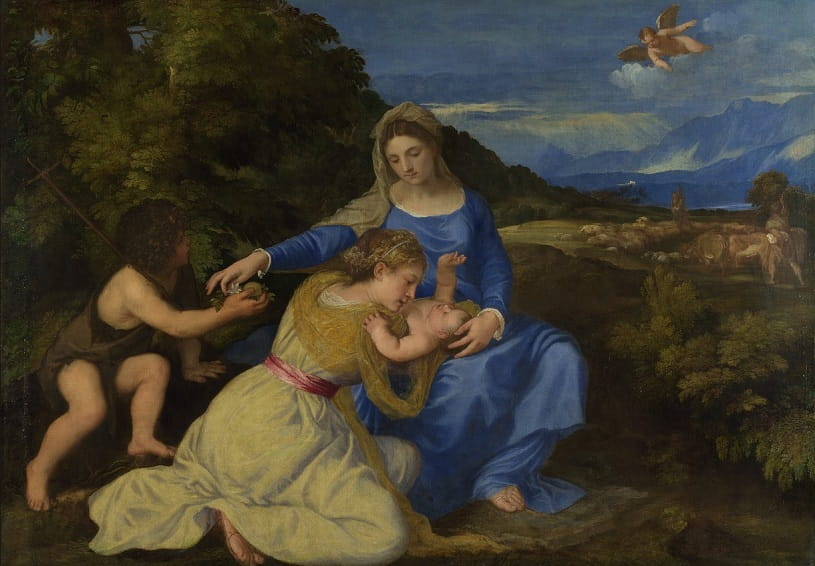 Image via https://wikimedia.org
Titian was one of the greatest masters of the Renaissance period, and his work has been regarded as near-perfection for centuries. He had a massive impact on the direction and subjects of Renaissance work, and became a big influence for following painters. His work is also regarded as bringing in Baroque elements well before its time, and may have helped instigate the movement.

He helped to guide the school of Venice, the most influential and prestigious art school in the Renaissance period, and in doing so essentially shaped the face of Western art today. A fitting question to ask next might be “who was influenced by Titian?” but the real question is “who wasn’t influenced by Titian?” His name might not be as well-known as Michelangelo or da Vinci, but he’s certainly done as much for Western art as they have.